DLP (Digital Light Processing)-based methods are very powerful ceramic additive manufacturing techniques for applications where good mechanical properties and high precision are needed. This technology shapes the ceramic in the form of a suspension using a photocurable monomer formulation. In the presence of an adequate photoinitiator, these compounds are crosslinked upon selective exposure to light, producing green bodies. This approach of using ceramic suspensions eliminates the need to handle any fine powders at the printer, facilitating the process in terms of safety precautions for operational exposure and also allowing for a better compaction of the ceramic powder to yield higher green densities and, subsequently, give higher densities and better mechanical properties to the sintered parts. [1]

The 3D part is directly derived from the CAD (Computer Aided Design) file. The CAD file is cut into layers of adjustable thickness, typically between 10 and 150 µm, and then sequentially cured in a mask exposure process, therefore converting the CAD file layer-by-layer into the physical 3D object.

Fig.1 shows a sketch of the principle of the DLP-based AM technology. [2] The system is based on dynamic mask exposure technology using DLP projection. An essential element of the system is the light engine with its projection optics. Powerful light-emitting diodes illuminate a DMD-chip (Digital Micromirror Device). By using light-emitting diodes as the light source, a homogeneous illumination and stable light output are achievable. The resolution and size of the resulting digital image are determined by the number of mirrors of the DMD chip and the projector optics used. For example, optics that produce 1920 x 1080 pixels, each with a size of 40 x 40 μm, result in a construction field size of 76.8mm x 43.2mm. Consequently, larger pixels generate larger construction fields. 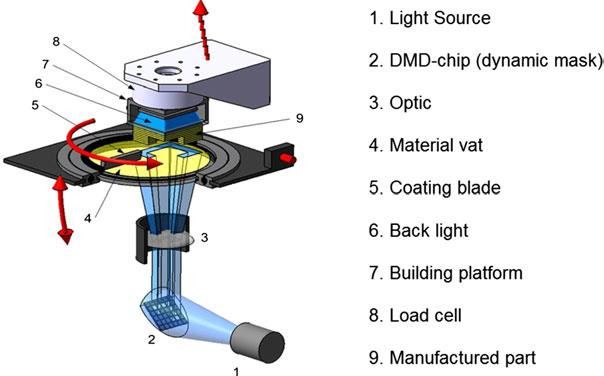 The main component of a DLP projection system is the DMD chip. Fig.2 shows a microscopic image of such a chip. [3] The operation can be interpreted as a light switch that allows light to be digitally controlled. By combining the mirrors with a light source and optics, it is possible to project a digital video signal. The signal activates an electrode below the micromirror which controls the tilt of the element. Thus, these micromirrors can be panned toward (ON) or away (OFF) from the light source, resulting in either a light or dark pixel on the projection plane. 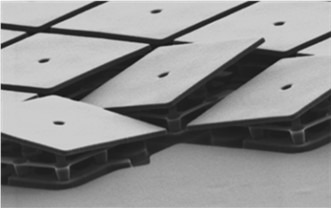 In addition to the Light Engine, the other main components of this system are the z-axis, a tilt mechanism, the building platform with integrated backlight exposure, a rotating mechanism and a static blade.

The movement of the construction platform in the z-direction can and should be realized by a high-strength and high-precision linear axis. The linear axis, as well as the tilting and turning mechanism, is controlled by PC via motor output stages and stepper motors. Additionally, a force sensor can measure the loads occurring during the construction process between the system and the components.

Software coordinates the various stepper motors, evaluates the data from the sensor and then sends the respective layer information in the correct order to the DLP projector in the form of bitmaps.

The production of ceramic components via systems using DLP takes place in several sub-steps, wherein the production of the starting material, the so-called slurry, plays a decisive role. The material used is a light-curing ceramic suspension, consisting of a premix with various organic components such as monomers, photoinitiator and dispersant, in which the inorganic ceramic powder is homogeneously distributed.

High solids loading is required to ensure high densification of the ceramic parts during the sintering process. The suspension has to be homogenous and stable in terms of filler sedimentation to ensure proper processability, and the viscosity must be adjusted to the system. For this purpose, different dispersants are used. Depending on the geometry of the desired green parts, different slurry systems are available, varying in filler content and crosslink density of the organic matrix in order to achieve sufficient mechanical green strengths.

The bottom-up principle used in some systems offers several advantages over the top-down. Firstly, there is no direct contact between the blade and the component, and just a small amount of material is sufficient for processing. In addition, small details are possible and thin layers can be reproduced. Suspensions with low viscosity allow for easy cleaning of the green bodies. However, support structures are required as soon as large overhangs have to be realized in the component.

After printing, the green bodies can be easily separated from the building platform. These composites of ceramic particles embedded in a photopolymer matrix have to be cleaned with an appropriate cleaning fluid, in order to remove any uncured suspension that sticks on the parts surface before debinding and sintering take place. It is important to choose a cleaning fluid that is capable of dissolving the slurry without damaging the cured structure. Fig. 3 shows printed green parts produced simultaneously in one run. Due to the mask exposure process, the necessary manufacturing time is only determined by the height of the parts. [4]

Low-viscosity slurries are necessary to enable good cleaning, particularly in relation to complex components with channels and pores. If cleaning with compressed air and solvent is not sufficient, an ultrasonic bath is another potential option.

In the further steps of the process of creating dense ceramic parts, the organic components (about 50 vol %) have to be removed from the green body during the debinding process. The temperature program for debinding is adjusted according to the binder system used. Most binder systems are based on acrylates and methacrylates as reactive components, and thus the decomposition of these main components begins at the same temperature, resulting in a large increase of the gas pressure in the component. If the combustion gases cannot escape, the structure will be destroyed, resulting in cracks. It is therefore necessary to provide the binder system with sufficient time so that the gasification products can escape from the part without damaging it. At these critical temperatures, specific holding phases in the heating profile of the furnace must be defined.

After binder removal, the ceramic powder in the component remains, resulting in the so-called white part. These parts are still dimensionally stable. However, the mechanical strength is very low. In the final sintering step, as a result of heating the component to the ceramic-specific sintering temperature, the ceramic particles coalesce and the component acquires its final material properties. This sintering process is accompanied by shrinkage of the component. 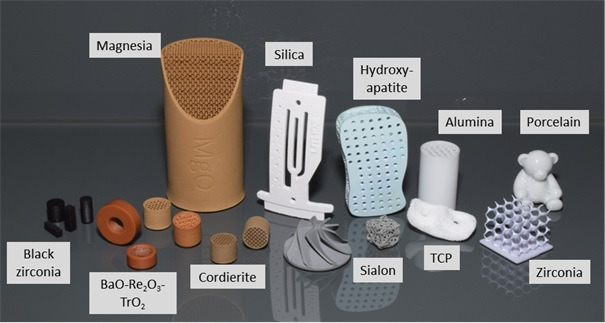 In addition to classic oxide ceramics such as aluminum oxide, zirconium oxide and silicon oxide, the range also includes non-oxide ceramics, such as silicon nitride, and various bioceramics, such as tricalcium phosphate and hydroxy apatite. Fig. 5a-d gives further examples of ceramic components which have been produced additively. [5] Important principles for the stereolithographic production of ceramics are a high solids loading and good optical properties for a high light penetration depth of the ceramic suspension. 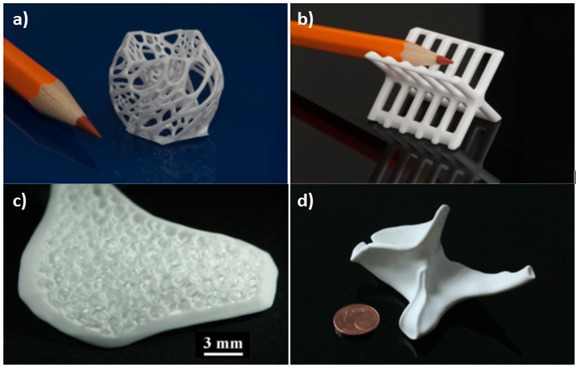 Ceramic parts fabricated by LCM possess properties very similar to conventional manufactured ceramics. [6] For example, when considering alumina, components with a relative density of 99.4% can be produced. Furthermore, their mechanical properties include a flexural strength of 426.8 MPa (4-point-bending) with a Weibull-modulus of 11, meaning that these properties are in the same range as conventional alumina devices. Examination of the fracture surface indicates highlights the equality of the material to conventionally manufactured ceramics, as can be seen in Fig. 6. [4]

The precision of the DLP system is below 100 µm and the achievable minimum feature size is around 150 µm. Thus, holes up to a diameter of 150 µm as well as cellular structures with strut thicknesses around 100 µm can be realized and reproduced. The high precision and accuracy of this technology, in combination with the high density of the sintered parts, makes it possible to manufacture geometrically complex ceramic parts with excellent mechanical properties unmatched by any other ceramic manufacturing technology. The technology is particularly well suited to bioceramic applications, as it allows particularly complex individual structures to be produced (e.g. bone implants). Fig. 7 shows a trabecular bone scaffold produced via LCM technology. [7] 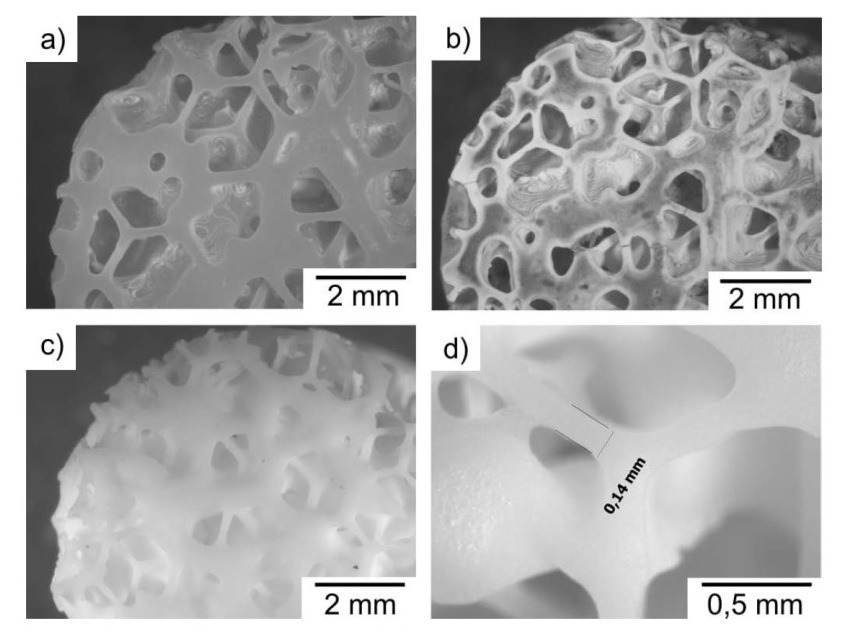 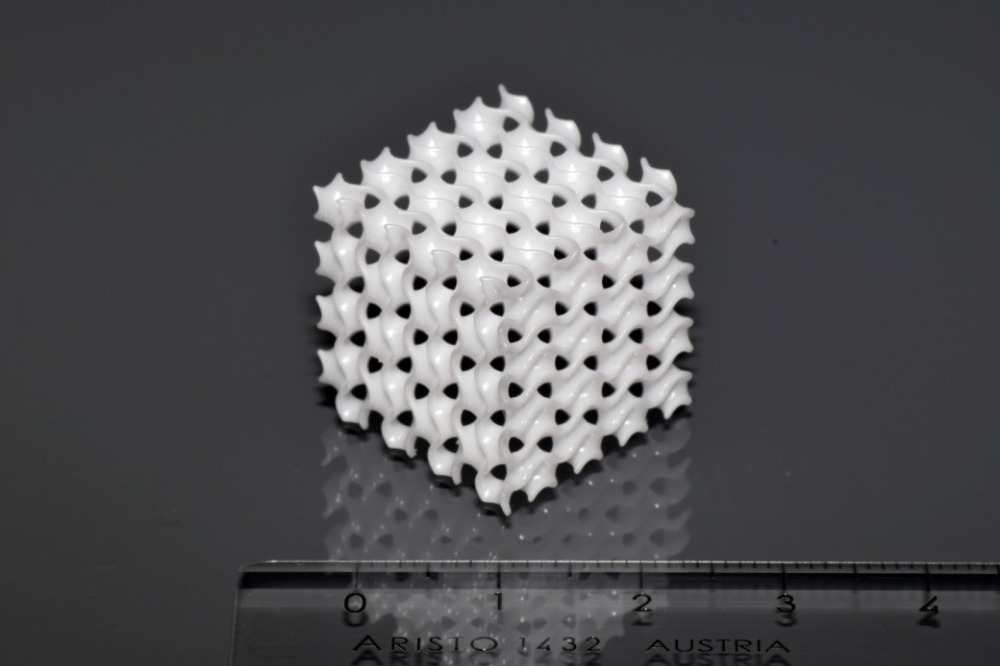 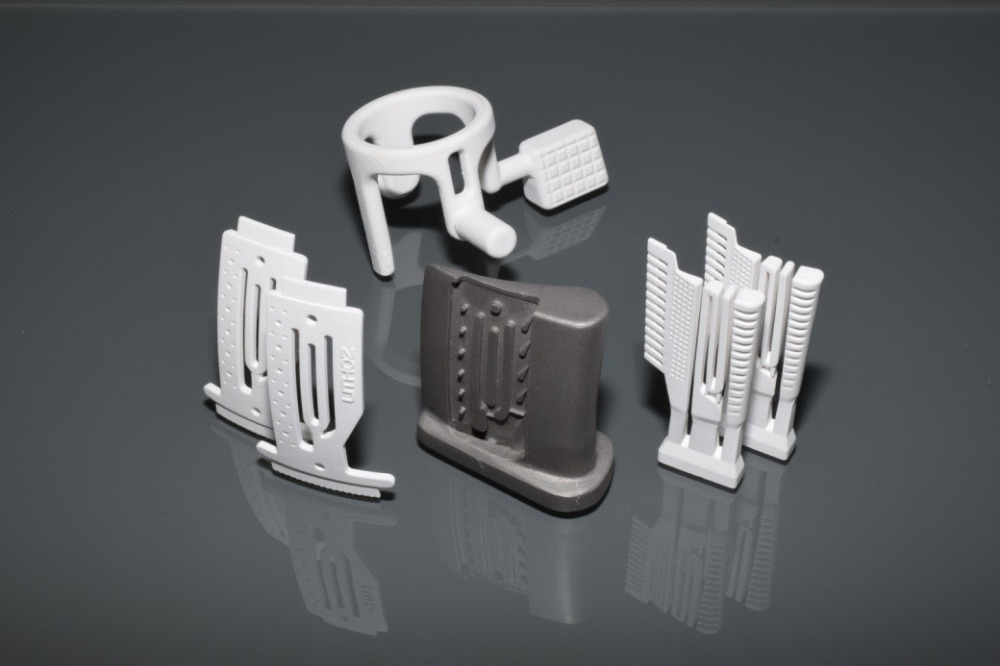 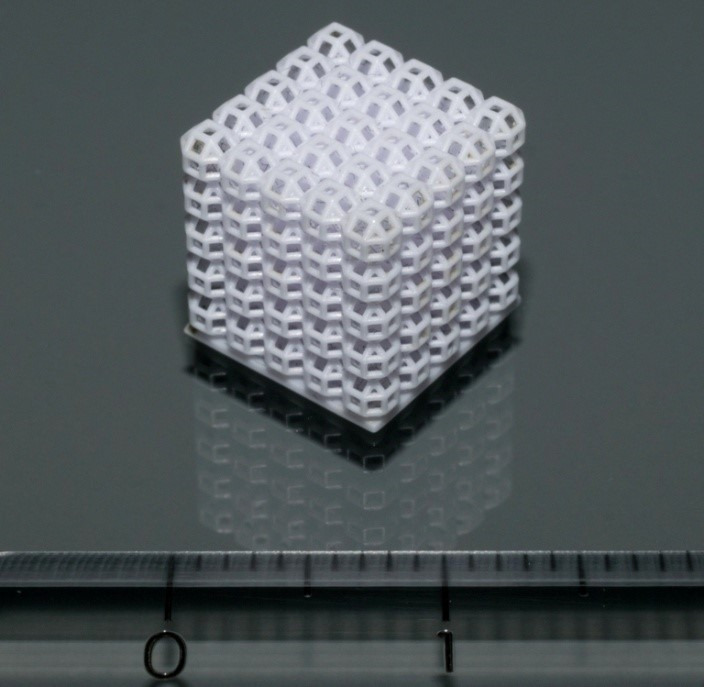 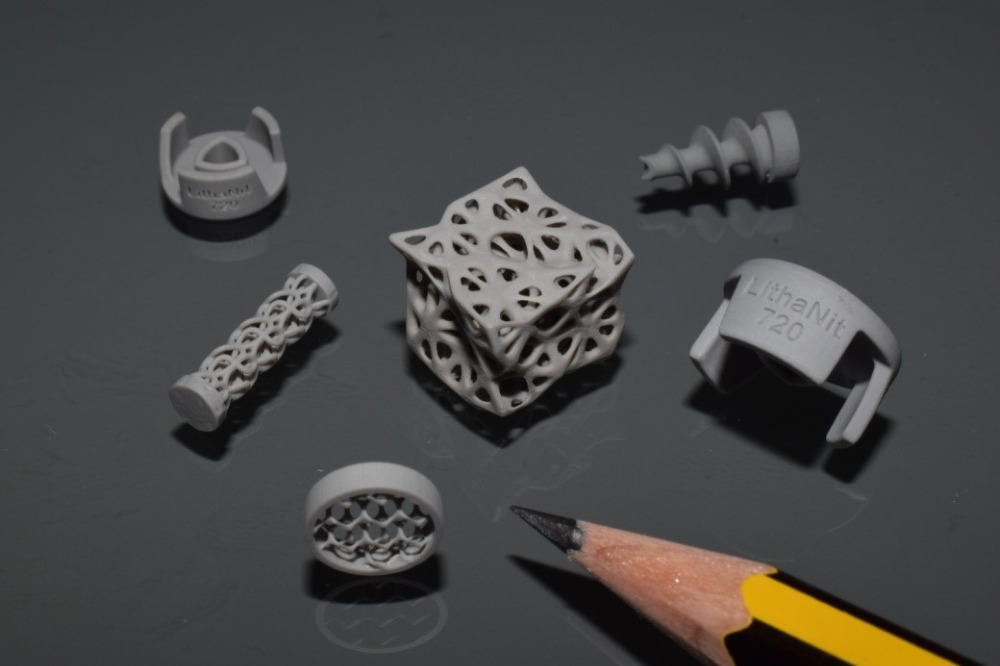 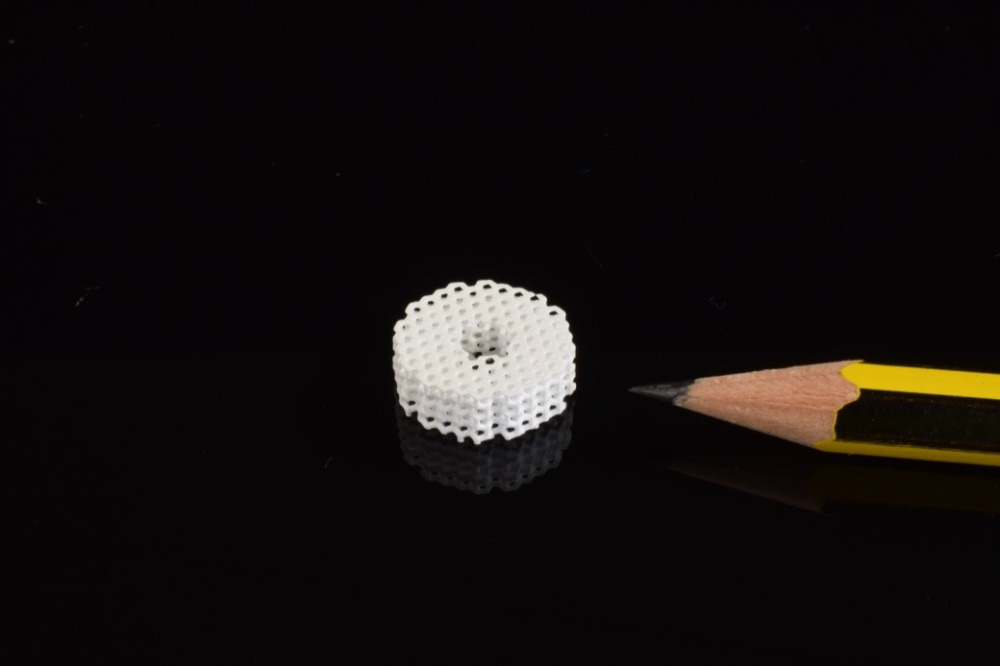 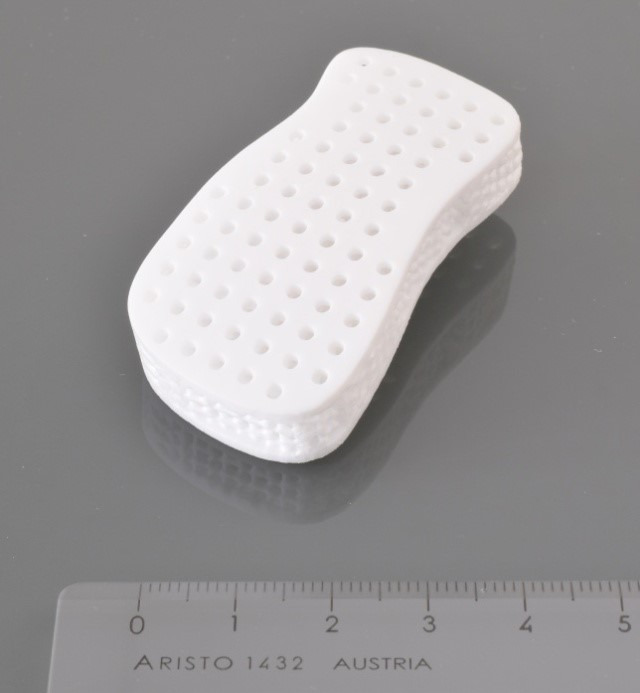